Child witnesses of family violence in the Victorian context 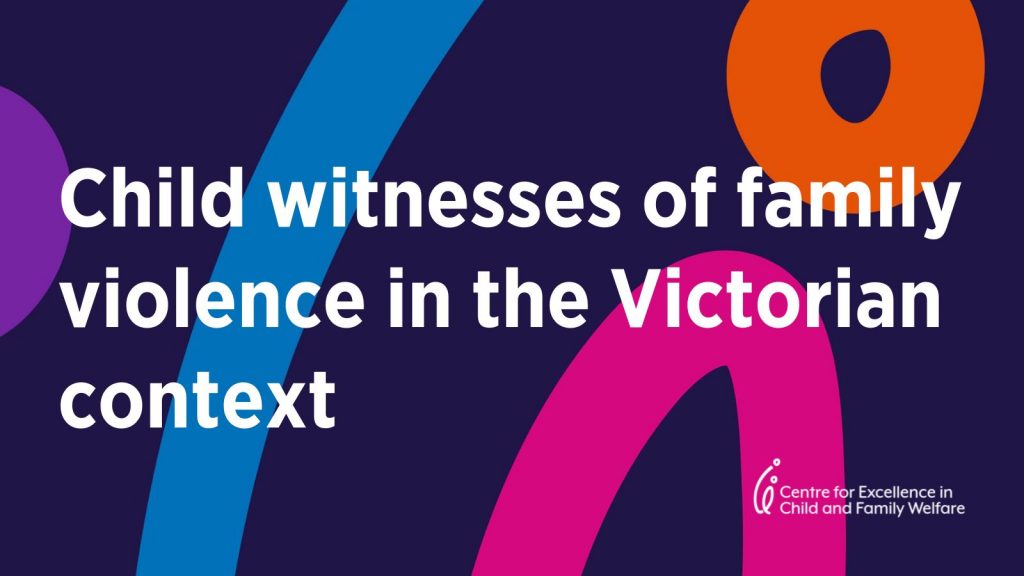 A February 2021 report entitled Child Witnesses of Family Violence: An Examination of Victoria Police Family Violence Data produced by the Crime Statistics Agency provides valuable insights into the prevalence and impacts of witnessing family violence on children aged 0-17 in Victoria. Over a five-year-period in Victoria, 109,356 family violence incidents occurred with at least one child witness present. Of those child witnesses, over two-thirds were aged 9 years or younger. Studies show the significant impact that witnessing family violence can have on a child.

What do we mean by ‘exposure to family violence’?

What is the most common form of family violence witnessed by Victorian children?

Where are children most likely to be witnesses to family violence?

According to the report, 92.3% of reported incidents of child witnesses to family violence occurred in a residential location. The top five local government areas where children witnessed family violence were Latrobe, Swan Hill, East Gippsland, Wellington and Mildura, with regional and remote areas in Victoria presenting a rate of incidents 1.8 times higher than metropolitan Melbourne, relative to the population. The report also noted that over 50% of the incidents in rural and regional Victoria took place in areas that ranked lowest for comparative socio-economic advantage/disadvantage.

What are the impacts of exposure to family violence on children?

As highlighted by the March 2016 Royal Commission into Family Violence, children who witness family violence are directly impacted by that experience of violence and should have access to the same protections as others who experience violence. The study found that an average of 76.65% of children aged 0-17 who witnessed family violence had future contact with the justice system as either victims or offenders. In addition, child witnesses of family violence were likely to engage with the justice system as a complainant on a Family Violence Intervention Order (FVIO) or a Family Violence Safety Notice (FVSN), demonstrating that attempts at intervention are being made, but the efficacy of those protection orders is not yet clear.

The report highlighted how experiences of family violence in childhood can lead to negative short-term and long-term outcomes in a child’s health and wellbeing. Research identifies a range of impacts, including impaired cognitive functioning, mental illness, reduced academic outcomes, the act of externalising (e.g. the showing of aggression towards others), the act of internalising emotions, behavioural issues, learning difficulties, and low self-esteem.

PrevPreviousWhat does the federal budget include for children and families?
NextRecord number of organisations stand in allyship with LGBTIQ+ community on IDAHOBIT DayNext