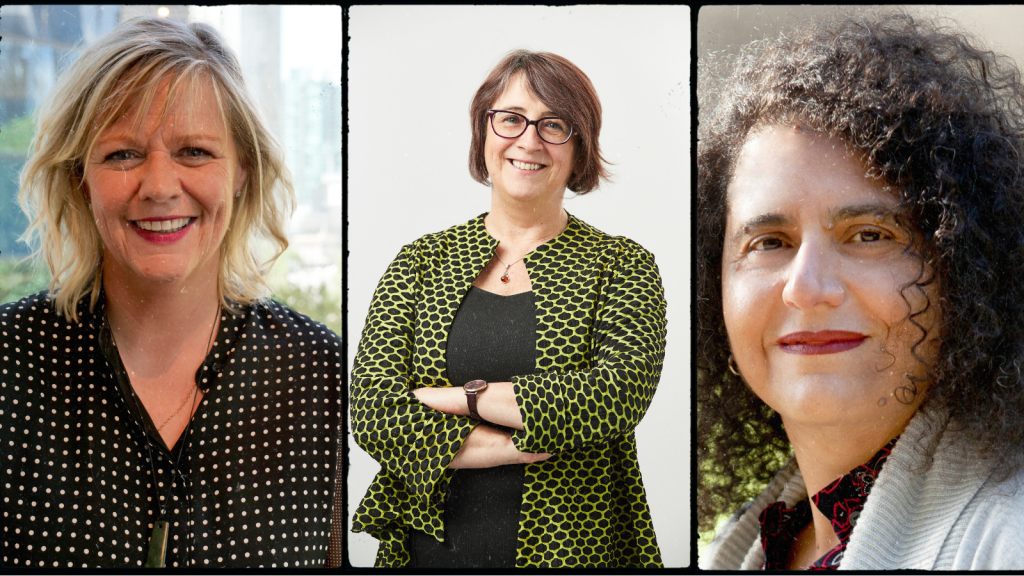 Today we celebrate International Women’s Day, a day to celebrate the social, economic, cultural and political achievements of women. This year, the Centre’s CEO Deb Tsorbaris met with CEO for No to Violence, Jacqui Watt, and CEO for Safe and Equal, Tania Farha to discuss the role of gender in domestic and family violence, achieving gender parity, and how we can move towards a gender-violence free world in the future.

Why do you think that International Women’s Day is important, and is still relevant today?

Tania: International Women’s Day has been recognised for 111 years now, but today it’s a really more of a consideration that there’s still more to do. We haven’t achieved equality. This has been really highlighted during pandemic which has exacerbated all kinds of disparities. The more affected industries tended to be those that impacted women the most. Women shouldered the lion’s share of caring and household work as well as having to pivot to working form the home. When people were forced to access super the majority of those people were women, putting them even more behind in superannuation than they are at the moment. We also saw rates of family violence increase at this time.

In what ways do you think Australian has progressed towards greater parity, and which areas do you feel need greater action?

Tania: If I reflect and think about progress in this country, we’re seeing more women feeling confident to progress in traditionally male-dominated areas like STEM, and there have been great examples of women leading countries around the world. But of course, we need to see more women in leadership positions, in both private and public spheres. Australia is a very diverse country and although we’ve seen progress in the mainstream, there are still pockets in this country where we haven’t seen much progress at all. When I think of Aboriginal and Torres Strait Islander women, refugees and migrant women, there is no equality of experience and that’s something we need to focus on much more.

Jacqui: In the seven years I’ve been in this role, something I have noticed is that we’re having different conversations now. We’re beginning, as a whole community, to ask instead of ‘why doesn’t she leave?’, we ask ‘what is he doing?’ and ‘why does he keep doing it?’. We question what we could be doing better or earlier as a whole community to end gender violence in intimate partner situations. I think we’re on the trajectory to have these difficult conversations because of the courage of young women like Grace Tame and Brittany Higgins. But as Tania said, the burden is most keenly felt by women of colour, and by women who live in countries not as well off as we are. The battle is a global one that goes on daily.

Deb: It is so true that the amazing work of Grace Tame, Brittany Higgins and others is giving others a voice. Gender inequality and violence isn’t dropping off the agenda – the voices for change are getting stronger and stronger.

Tania: I think its indisputable that there’s a significant connection. Evidence from Australian and international research proves this, and Victoria has been world leader in showing the connection between gender inequality and gender based violence. Something that is less simple is the social context in which gender inequality happens that allows gender-based violence to occur, and there are particular expressions of gender inequality that increase the incidence of violence, such as men’s control of decision-making, limiting women’s independence, rigid gender stereotyping, toxic masculinity leading to aggression, dominance and control… So yes, there is a significant and well-established connection there.

What is there to say about the experience of family violence on children?

Deb: Most women want to take care of their children, yet we’re still seeing tens of thousands of children witnessing or being on receiving end of violence every day. We are starting slowly but surely to understand the impact of family violence on children and what we need to do about it.

Jacqui: One of the things we know from working with men is that many men reach a very pivotal point when they realise that they’re dishing out to their kids what they got as a kid, and I suspect that’s the same for some women as well. If we can get dads and mums at this point, before the violence takes place, we can do something about it, and we can show them that they can make a different choice. And we need to focus on recovery for children. Let’s hear their voices. A lot can get missed in a formal system, but we know that any kid with an experience of family violence is going to have some damage to deal with, so let’s plan for that now. Get in earlier and recognise that those in traumatic childhoods are more likely to end up in traumatic or violent relationships. We need to get further upstream earlier, to prevent family violence from cascading down generations.

Listen to the whole conversation here:

PrevPreviousRaising expectations and creating pathways to higher education for young people in out of home care
NextWhat does the federal budget include for children and families?Next