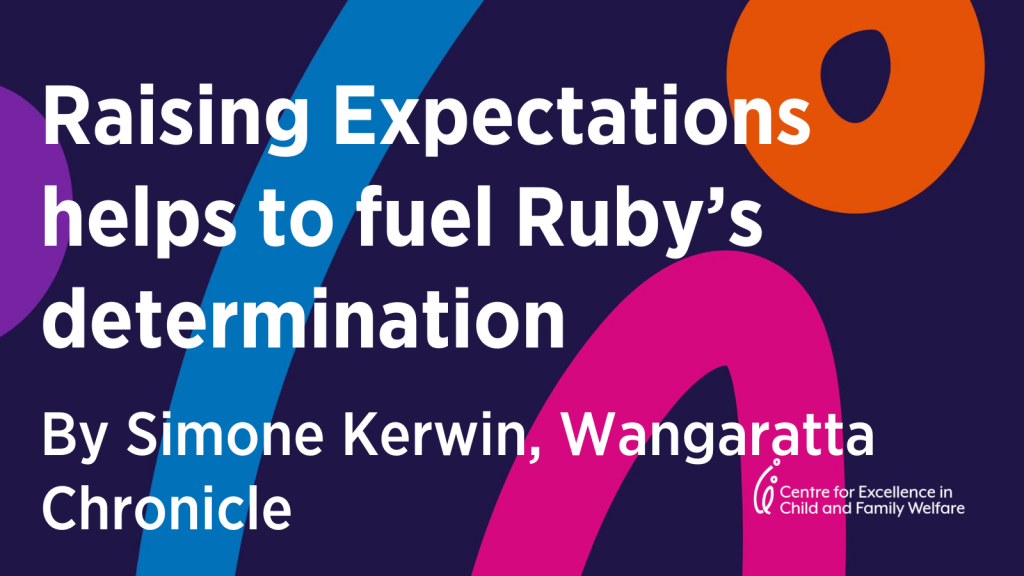 (As published in the Wangaratta Chronicle).

WHILE experiencing youth homelessness locally as a teenager, Ruby Sait maintained her determination to continue her education. Ruby ­ first experienced child protection when she was four, and was in and out of residential and foster care until she was 17.

“Life in the out-of-home care environment was hard. The whole experience made it extremely difficult to go to school and complete my studies,” she said.

“But I really wanted to do that for myself, and was spurred on to prove I could do it. “My education does matter, and was always important to me, but it was something I often struggled with.”

Ruby had attended several Benalla and Wangaratta schools before she departed mainstream schooling while living in Wangaratta, but the now-20 year old said she was eager to ensure she had qualification to her name, and set about undertaking VCAL (Victorian Certificate of Applied Learning) studies at GOTAFE.

It was through the VCAL course, and subsequent work experience at North East Media, that Ruby developed an interest in journalism, which she’s now pursuing through a Diploma in Communications at Deakin College before she transfers next year to the second year of a Bachelor of Arts majoring in journalism at Deakin University.

She had previously studied a Certificate IV in Professional Writing and Editing at Ballarat’s Federation University, where she forged meaningful friendships after struggling with that aspect of primary and secondary school while living in care. Along the way, Ruby has built on her leadership skills and ambitions; she’s currently in the role of YMCA Youth Press Gallery leader, which allows young people interested in media and journalism to tell the stories of the Youth Parliament of Victoria.

Opportunities including Youth Press Gallery have been among the positives to emerge from Ruby’s connection to Raising Expectations, a collaboration between the Centre for Excellence in Child and Family Welfare, and university partners Federation University Australia, La Trobe University and Swinburne University of Technology. The initiative aims to support young people in out-of-home care and care leavers to aspire to, access and succeed in vocational and higher education.

“If it wasn’t for Raising Expectations, I would never have found out what options I had for becoming a journalist,” Ruby said.

Although eligible care leavers aged under 24 can study from more than 800 TAFE courses in Victoria without having to pay fees, Raising Expectations believes too few take up the option, and is working to ensure they are supported and informed about options available to them.

Ruby, who now aspires to work at the ABC or The Age, said she would encourage others who had been in her situation to make contact with Raising Expectations.

“Don’t let anyone make you feel small, because you can achieve anything you put your mind to as long as you try,” she said.

“For me, I think because I have been through the out-of-home care experience, it put things into perspective, and actually makes me care more about people and have an awareness that you don’t know what’s going on in someone else’s life when you meet them.

“Hopefully, that will be valuable as I pursue journalism.”

Deb Tsorbaris, chief executive officer at The Centre for Excellence in Child and Family Welfare, said: “We commend the Minister for Training and Skills and Minister for Higher Education, Gayle Tierney, for having the foresight to fund this initiative, and look forward to scaling the program to support the aspirations of more care-leavers in the future.”